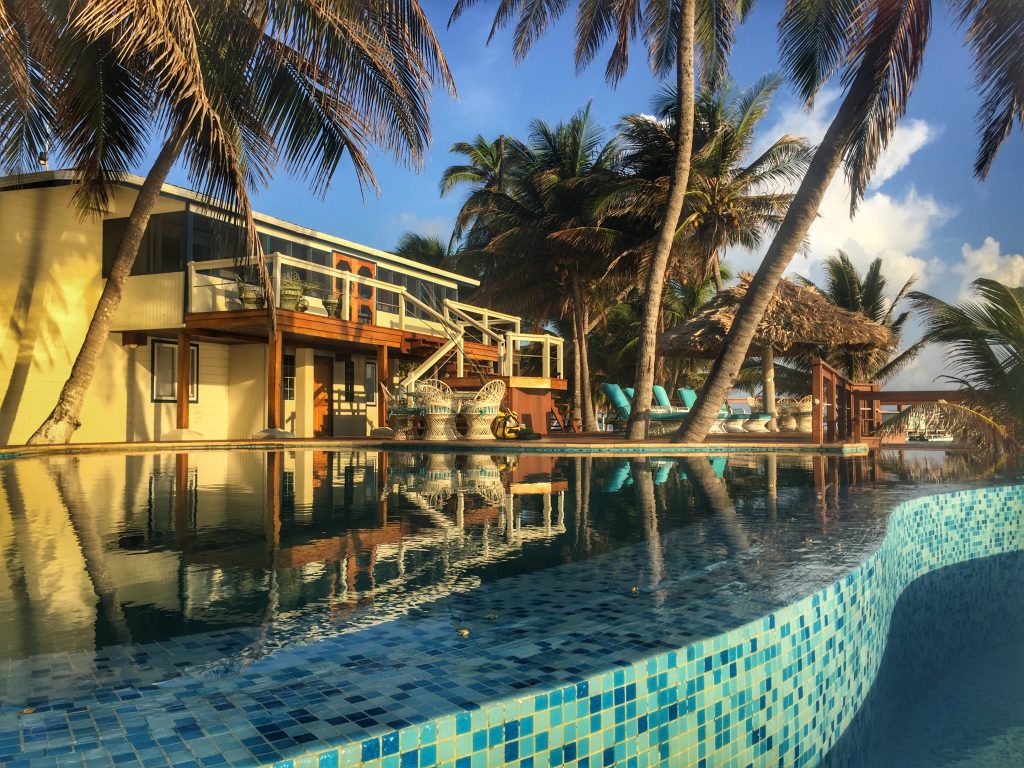 Promising permit. Well, that’s just crazy, but telling anglers they have a very high chance of hooking them at Turneffe Flats, that I will. Although, the week of July 22-29th put my words to the test.

Sunday, July 23rd. Day one on the water. Wind from the east and rain, lot’s of rain. No problem, my boat mate and I both had rain coats and pants. I’m sure those rain pants would have worked great, unfortunately we both left them in the room. Oh well. We weren’t really thinking about how wet and cold we were because there were permit everywhere. I couldn’t believe it. I also couldn’t believe that with so many fish around we couldn’t convince one to touch our flies. I was not concerned at all. I knew the next few days where going to be bright and sunny with light winds. Light from the north, it’s going to be great. Didn’t see a permit for the next two days. Our guide Dion was blaming the north wind for the fish vanishing. I wasn’t that convinced but, I had never fished Turneffe with a north wind. Checking the weather I saw Wednesday the winds would be from the east until around noon so, we were going to put Dion’s theory to the test. We round the corner Wednesday morning and sure as S*** happy permit everywhere. My boat mate sticks and lands one. I jump up, put a cast on them and boom missed the hook set. Around noon the wind shifted to the north and those fish vanished in the blink of an eye. Yep. That would be my only permit eat all week. It was my lucky week. Sure, I like permit, but I love tarpon and it seems they didn’t mind a north wind.

My friend and boat mate for the week, Frayser, fished Turneffe with in March and was also looking forward to getting into some tarpon. He boated a nice one Monday that decided it was not in the mood for a picture. I think we all really wanted to get his picture with a nice tarpon, so the next day we were going to try again. After a little looking we found a great cut with good water movement. First cast, Frayser is hooked up to a very nice tarpon. The fish is jumping and heading to deep clear water then decides that the trees look better. That fish turns and heads straight into the mangrove roots. Now we have Frayser’s tarpon and about 20 yards of fly line in the trees. I grab the rod and out of the boat I go. We are not losing this fish. Once I swim to the trees I notice that the roots are moving. What? What is going on? I got the answer very quick, mosquitoes and millions of them. No turning back. I am getting this fish out of there. I put the reel in free spool just in case he decides to bolt, so that the rod doesn’t hit a root and blowup. I couldn’t see the fish from where I was so the guys in the boat were giving me updates on how close I was getting to the fish. Once I got close to the fish and all the line was clear of the mangrove roots, I gave the line a tug to get the fish to move. He’s heading back to open water and I’m swimming back to the boat. While in the water I hand the rod back to Frayser before I was back in the boat, the fish jumps and pop. Heart breaker. I’m sure the leader got nicked up in those roots. Oh well. Frayser hooked a couple more that week but we never got one of his to the boat for the pic. Next year my friend, we will get you one next year. 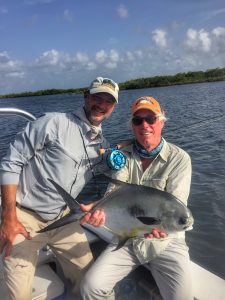 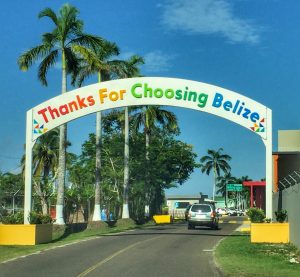 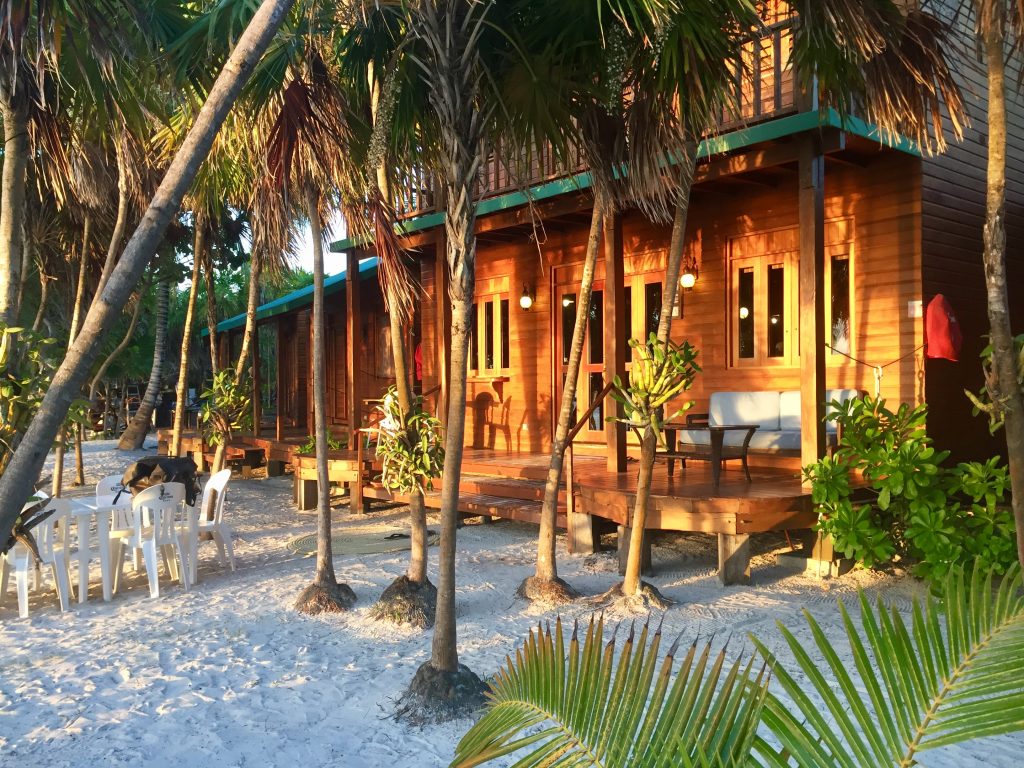 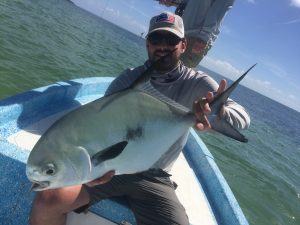 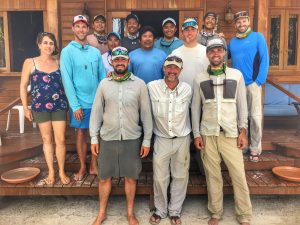 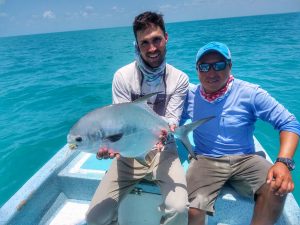 I did my best to let these guys know what they had accomplished but, this was the first saltwater trip for three of them.  Brothers Kyle and Eric boated four permit one day including the biggest one of the trip. Oh, and they boated four because they were doubled up with 20+lbs fish and one broke off. Crazy guys, that’s just crazy. They also landed some great tarpon and bonefish. Awesome work guys for your first trip. We will be expecting more out of you next year. BAHAHA.

I can’t say how happy I am that my good friend Cole not only caught his first permit and came in Sunday with a slam, but ended up boating a total of four permit that week. Congrats Cole. I do have to throw in I watched him pop of a 20+lber on the hook set. No worries, I had his back. I followed him up a couple minutes later by not setting the hook on a very nice permit.

Robbie, where do I start? He got stuck in the boat with me for the first two days. Short straw. I guess he drew the short straw. Anyways, we started Sunday off with Jose saying he knew where there were some big tarpon. Right on. Lets do it. Of course that’s what ever angler thinks until they set the hook and that beast launches into the air. The next thought is not PG13 so you can use your imagination. After Robbie had been casting for awhile I suggested we change flies and I’d take a couple cast. On the second cast I realized I had made a mistake because turns out the fish was not going to give it back unless we removed it. After a longer fight then I’m going to admit, I got my fly back. Off to find permit. While looking for permit I like to cast at the trigger fish. Robbie was up and in between shots at permit he puts a cast on a nice trigger that eats the fly. You guessed it. Yep. Here come more permit. In trying to move and release that trigger fast our Jr guide Chris got his thumb a little to close and that fish took a very nice chunk out of his thumb.

Monday, day two. Sure, let’s go back to the big tarpon spot. All you Robbie, he must have thought it looked like fun. Second cast, the ocean explodes and a silver missile well over 100lbs launches out of the water. I’m not clear on what happened next. All we know for sure is, the fish broke off, about three feet of fly line/running line was stripped down to the core and Robbie’s stripping guard was cut. Thank god that fish broke off and Robbie still has all his fingers. He did go on to finish the week boating some great tarpon and bonefish. Next year Robbie. Don’t you worry. They will have some fresh scorpions for you when you get that permit next year. 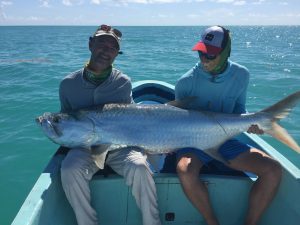 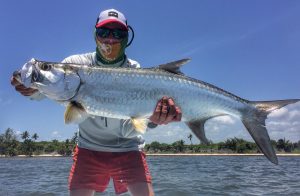 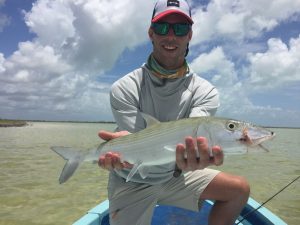 Round two for Brian. He fished La Pescadora last year. I guess he was done messing around. He started and ended the trip with slams. He filled the days in between with tarpon, snook and bonefish. He did boat more permit that week but, only put the big three in the boat together on Sunday and Friday. Awesome work Brian. Great week. Congrats. 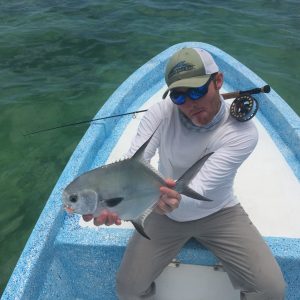 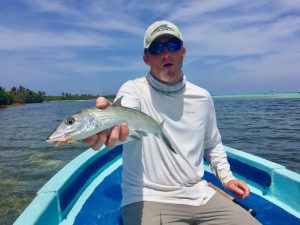