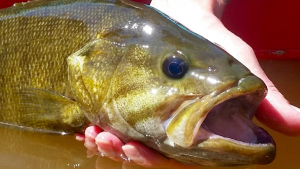 Come experience three of Virginia’s best fisheries bundled into one amazing trip. Our Virginia Trifecta Float is designed for those anglers that want to chase the states three most prized freshwater species in a single trip.

Your trifecta quest will start on the beautiful Shenandoah River, ( River #1). April is hands down one of the best months for very large smallmouth. This time of year the smallmouth are in what is refereed to as, post suspension/prespawn. The larger fish are very hungry and aggressive during this transition. While targeting these fish with larger subsurface patterns it’s not uncommon to catch musky as well. May is often similar. As temperatures start to drop in September smallmouth with start trying to put on weight for the winter. This weight gaining feeding behavior will continue through November depending on water temps. Again, it’s not uncommon to catch musky while targeting trophy smallmouth this time of year.

River #2, the Jackson. The Jackson River is Virginia’s best wild trout tailwater and home to some of the largest brown and rainbow trout in the state. There is no better time to target these large wild trout then spring and fall, not to mention it’s also the most beautiful times of year to experience this amazing fishery.

River #3, the James. You will only know as the sunsets on you final trifecta day whether the last stop was the best or toughest, you might possibly call it both. The James river is an outstanding musky fishery. Fish over 50″ are not out of the question. However, any size musky is a great catch. Much like the Shenandoah only in reverse, while targeting musky it’s not uncommon to catch trophy smallmouth during your Virginia Trifecta float.

Although we offer float trips on all three of these rivers year round, the Virginia Trifecta floats are only offered when all three rivers are at safe water temperatures for catching and releasing the target species with the highest chance of survival. We do not target musky when water temps are not conducive to healthy catch and release.

Trips are very limited. Middle of April-May and September-mid November.  For more information about this trip please, give us a call. (434)977-6882. Pricing covers 1-2 anglers.